If you know me in real life, you’ll know that I have a lot of ideas. Like…a lot. And that I’m a perpetual starter. Sounds envious to many people, but left unchecked, this was a combination that caused me a lot of trouble over the years.

I used to joke that the internet was scattered with my half-finished projects. A personal blog, a home decor meets food blog, a food business, a student org, a defunct business blog. 🤦🏻‍♀️

Any chance you can relate? For you, it might not be the front page of Google. It might be your home; your Trello board; your email inbox.

The “For Later” folder that you didn’t open until coronavirus hit. The screenplay that you’ve been too scared to face because you’re worried it won’t fulfill you. The dead-in-the-water business collaboration that never took off. The freshmen 15 that you never lost. The paintings you didn’t hang, even though you moved in 4 years ago. <– All of these are real stories, for the record.

You got sidetracked; derailed; off track. <– Who knew there were so many train analogies for this?

You painted yourself into a corner, telling yourself you were a procrastinator; you’ve always been like this; it’s just not even worth it. And yet, those back burner projects eat away at your mental energy, like a little leak in your pipes.

I was asked recently on a podcast, “What was the biggest limiting belief that you had to overcome to be where you are now?” Without so much as a pause, I knew that my answer was: “I don’t follow through.”

With many years of coaching work under my belt, I can now proudly say that I’m a reformed half-finished project person. (Say that five times fast.)

Here’s what life looks like on the other side of half-finishing: You look around, proud of what you’ve created. You have that sense of accomplishment; that feeling that you saw it all the way to the end. You managed all of your discomfort, building your belief in the cliche-but-true phrase, “I can do hard things.” You started craving obstacles, because you realized they’re what make you more tenacious and gritty.

And here’s the weird part that people don’t tell you: That big goal you wanted? It feels good when you achieve it, but if we’re being honest, it’s a bit anti-climactic. You soon realize it’s not about the end result; it’s about who you had to become in the process. You started enjoying the process — discomfort and all — instead of relying on the end result to feel good. And let me tell you; that feels freaking fantastic.

Here are my four best tips, if you want to become a reformed half-finished project person, too.

Here’s coaching in a nutshell: Thoughts create feelings, which fuel actions, which create results. So changing the input (your thought) naturally has a ripple effect on the output (your result).

At their core, half-finished projects are left unfinished because of unchecked and often unconscious thinking, which can look like “I don’t follow through” (my old go-to), “I lose interest when it’s not novel anymore” or “I don’t have enough time.”

Start to detach from your own limiting narrative with this one-word tweak: Tack the word “historically” to the front of your thought.

For example, “I don’t follow through” becomes “Historically, I haven’t followed through.”

It’s a small enough tweak that your brain won’t reject it, but it’s big enough that it gives you the wiggle room needed to begin to change your self-fulfilling cycle of leaving projects uncompleted.

Want more? Here’s a comprehensive guide on how to change your limiting beliefs.

Do, dump, delegate, or delay

Make an exhaustive list of all of the unfinished projects in your life, then ruthlessly decide if you’ll do them, dump them, delegate them, or delay them.

Remember: Not all half-finished projects are meant to be completed. Back when I used to co-run an online business called One Woman Shop, we had a phrase from Arianna Huffington that we referenced often: “You can complete a project by dropping it.”

I’ll be releasing a checklist soon that details how to know if your project is worth finishing, but for now, dump the ones that are obvious mental energy drains for you. Ah, sweet relief.

Chat with your Future Self

I think that one of the single most detrimental things that we can do in life is look to our past for evidence to limit ourselves. This looks like “I’ve never done it before,” “I haven’t figured out how,” and “I’ve always been like this.”

The antidote is to commune with your Future Self instead. Have a little dialogue with the version of you that exists a year from now, who finishes projects.

What does she/he/they say that you should do right now about the projects currently on your plate? Which ones should you do, dump, delegate, or delay and why? Of the ones you do decide to tackle, what is the first step that your Future Self says you should take?

Like I said to a client recently: “Listen, if you’re going to have a party with Past You, at least invite Future You to the party, too.”

Want more? I love the concept of your Future Self so much that I invited a behavioral economist onto The Pique Podcast to explain the phenomenon in even more detail.

The average person who wants to create a specific result sets a half-hearted goal, tries a little bit, then gives up when it gets hard. (This was me.)

Massive action, on the other hand, invites you to take action over and over, constantly pivoting as needed, until you reach your goal. Every single falter is just an obstacle, and all obstacles have strategies for overcoming them.

How would your life change if you embraced massive action? It means no amending your goal, no blaming outside circumstances, and no giving up. For me, it was a game-changer.

You’ll want to join one of the free, interactive 10-person Monday Hour One workshops that I host on a regular basis. 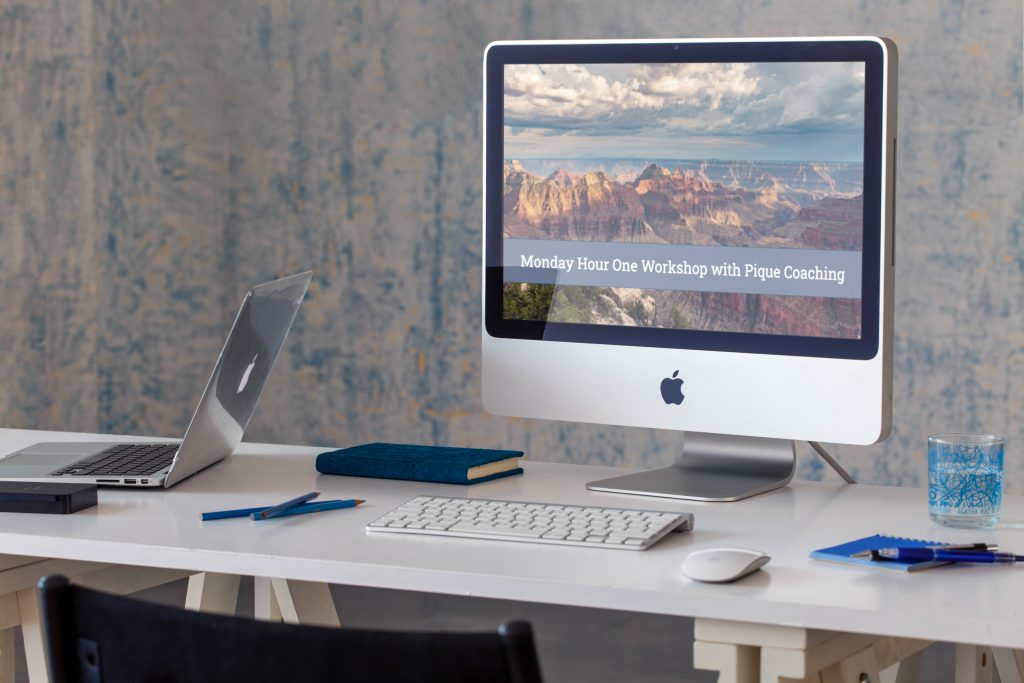